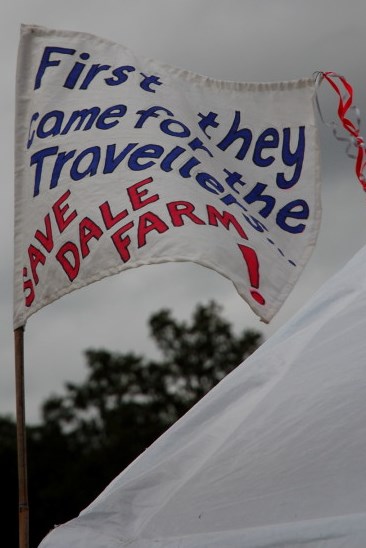 In the last week several Traveller communities as well as Traveller rights campaigners have been subjected to police raids. The police claim the “Operation Elven” series of raids, including one at Smithy Fen Traveller site in Cambridge, supposedly concern thefts of Chinese artefacts and rhinoceros horn from museums and auction houses across England and Ireland. However, police have been accused of serial heavy-handedness and faulty intelligence.

In many cases those whose houses were searched have no connections to the people named on the warrants. In the course of these raids elderly and disabled people have been forced out of their homes, their belongings seized and at Smithy Fen their electricity inexplicably cut off. This included a home where the owner requires electricity for daily use of vital medical equipment. In another case the husband of a heavily pregnant woman was handcuffed and taken away from his family only to be released without charge.

On Tuesday lifelong Traveller rights campaigner Grattan Puxon and his wife, a retired couple in their mid-seventies, were subjected to an eight hour raid on their home by Taser-armed police. Mr Puxon was subjected to a body search and his wife was forced to be supervised whilst dressing.

Dave Landau, of Traveller Solidarity Network, expressed his very serious concerns about the motivation for the police’s heavyhanded and intimidatory approach:

“I don’t want to be alarmist but I think this is a very serious development. The police’s ‘Operation Elvin’ strikes me as a classic case of ‘racial profiling’ and a useful cover to harass the community. It would be like, say, a couple of Jewish people did a series of robberies and the police raided the Board of Deputies and synagogues looking for the proceeds And the raid on Grattan must surely be an attempt to silence the most prominent champion of Travellers’ rights and intimidate our movement.”

Phien O’Phien, a vocal Traveller rights campaigner from and on behalf of the Traveller community, made the following statement:

“Police have been raiding premises of Travellers all across the country and in some places in Ireland. They are allegedly only looking for a few men and their ill-gotten gains but are scouring the whole Traveller community as an excuse.

People are concerned for their cars, phones and trailers, not because they have done anything wrong but because, if the police take them it will be months before they get them back and then with not even a ‘sorry for your inconvenience’

This action by the police is very similar to the actions in the 80s against the black community when they raided Brixton and Moss-side in Manchester.

Its as if the defenders of civil and human rights have allowed this to go on without comment while the police state the gang they feel are responsible are not even in England but in Ireland and abroad. Imagine the out cry Muslim homes in London were raided because of alleged crimes committed by Muslims in Birmingham.

There was one man who as he was being raided was talking to me, he was showing the inspector in charge his yard deeds to show he wasn’t the address on their warrant yet they raided him anyway, after all any mistakes can be “lessons learned, lines drawn under” while the tax payer picks up the bill for the illegal actions of the police.

There needs to be questions asked about this in the house of parliament. I’m willing to sit down with any friendly MP and give them the low down on this matter.

Most Travellers are law-abiding and just want to be left alone but while we can be attacked in this inclusive way we will never have the right all others have in this country to be protected by the law rather than abused by its police force. “