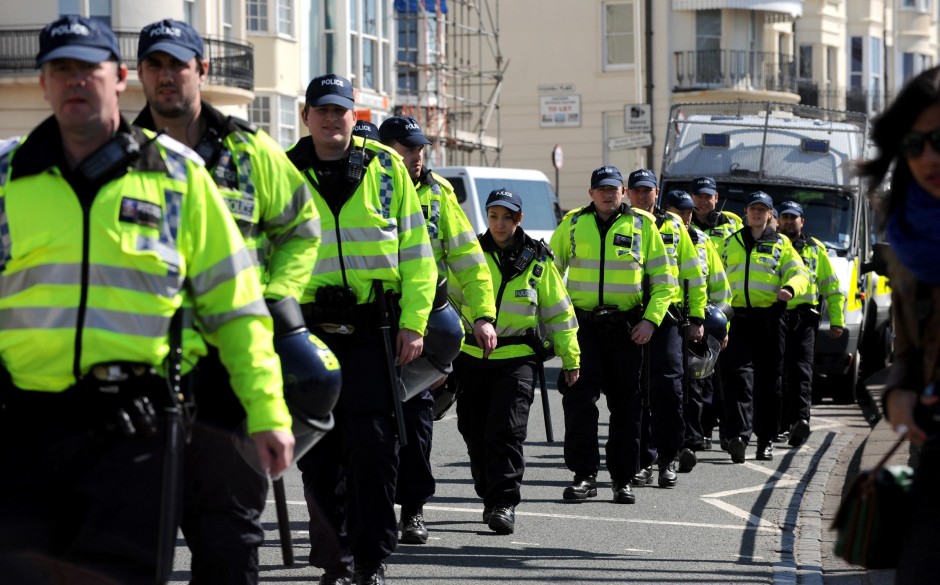 In this age of mass surveillance, data analysis, and in-depth profiling, there are good reasons for keeping your name and address off the police database when stopped and searched.

Netpol and our partners in Green & Black Cross frequently stress that police powers to stop and search do not include the power to demand a name and address. Sometimes, however, the police decide not to pay much attention to individuals seeking to assert their rights and instead use stop and search powers as a de facto ID check.

In May, we issued a call-out asking activists who had gathered to oppose the far right ‘March for England’ in Brighton on 27 April to tell us if they had been arrested or faced the threat of arrest for refusing to give their personal details. Some of the initial responses provide an illustration of the abuse of stop and search powers that they experienced.

Observers noted that the police frequently threatened to arrest protesters who insisted on withholding their name and address. Where they could, officers also noted a person’s name from items they found during the search, such as bank cards, although the search powers they were using allowed them solely to look for weapons. It is thought that at least one person was arrested as a result of failure to provide details during a stop and search.

One activist told us that three different police officers demanded her name and address and none of them were prepared to take no for an answer. Eventually, they allowed her to leave.

One activist told us that a police officer claimed the right to demand personal details by accusing him of intending to commit crime.

“Two cops stopped and searched me. I thought they were going to let me go, but then one of them said that because he had reason to think I was going to commit violent disorder he was going to take my name. I guess I looked sceptical because then he said he was going to arrest me if I didn’t do as he said. I thought it wasn’t legal, but reasoned I was either going to have give my name there or at the station, so I gave them my name and address.”

Another was searched three times during the day and was also threatened with arrest for not giving her name.

I then asked: ‘so, you are telling me if I don’t give you my details you will arrest me’. He said ‘I could arrest you’. I said ‘okay, I believe I am not legally obliged to give my details, and you have not directly answered my question on that. I believe you have no right to arrest me, and I will challenged that in court, so if you want to arrest me go ahead.’ He said ‘you don’t want go down that route’. His colleague then came up to him and called him aside. When he came back he said, ‘you’ve been lucky this time, I’m letting you go this time’.”

These scenarios are all too common. Sussex Police used powers under ‘section 60’ of the Criminal Justice and Public Order Act that do not include the power to demand a name and address.  Unlike other stop and search powers, ‘section 60’ enables officers to search without the need for ‘reasonable suspicion’. This meant they could pick and choose who they want to search, without any need to justify their selection.  ‘Section 60’ powers are, in law, limited to searching for weapons, but in practice the police will also search wallets and purses for bank cards, ID documents or anything else containing a name and preferably an address

If this fails, the police are increasingly likely to turn to other powers to obtain personal details. The most common is an accusation that someone they have stopped has been, or is, engaging in ‘anti-social behaviour’. Anti-social behaviour is defined in law as behaviour likely to cause harassment, alarm or distress, but the police often interpret it as any behaviour they just don’t like.

A Sussex Police Inspector at the March for England was heard to comment that taking part in a group that was ‘running around dressed in black’ was sufficient to amount to anti-social behaviour.

The police certainly do not have is a pre-emptive right to demand details on the basis they believe someone is ‘going to’ do something. Yet, as the experience of the protester quoted earlier indicates, officers often get this wrong, whether deliberately or in ignorance.

The evidence, in totality, suggests that Sussex Police were operating a predetermined policy in Brighton to take details, regardless of individual rights. They were carrying out de facto ID checks, when they clearly do not have powers to do so.

It is not just protest that is affected in this way. Netpol member Newham Monitoring Project has reported how young people who are stopped and searched in east London often say they were unable to refuse to give personal details to the police. While many are aware that that is their right in theory, in practice they are told that the result of exercising their legal rights is arrest, handcuffs and finding themselves bundled into the back of the police van. It is an ID check policy that disproportionately affects young people in working class areas, particularly those who are black or from ethnic minority backgrounds.

It is difficult to argue with police officers who are threatening arrest, especially as many of us have important demands on our time and no-one can spare six hours or more for sitting in a police cell. It is entirely understandable that many people choose to take the route that is, in the short term at least, the simpler one.

But a protest is an easier place to assert your rights, surrounded by other activists and with legal observers on the streets to provide support, than standing on your own in a dark street in Newham. It is important that people choose to stand up to unlawful police practices – the more ID checks are normalised, the harder it becomes to challenge them. That is why everyone who stood their ground in Brighton and refused to provide personal details, even when that put them at risk of arrest, deserves our utmost respect.

We still need your experiences of the use of stop and search at the Stop The March for England protest in Brighton on 27 April. If you can help, please contact us.

We have received another account of an arrest for failing to provide personal information during a section 60 stop & search in Brighton on 27 April. It also indicates Sussex police officers’ evident lack of knowledge of the powers they are misusing:

Me and some mates were chilling near the Clock Tower in central Brighton when a group of cops came over. They said they were going to stop and search us. We asked why and were told it was under section something and that we didn’t have to give our details.

The cop searching me asked if I had anything I shouldn’t that I would like to mention before he searched my bag. I said “no”, to which he responded “well that obviously means you do”. He found nothing on me and started to wrap things up. I asked for a receipt. It was then that he asked for my details.

I refused, saying that I already had been told I did not need to give them. He then threatened me with arrest. I  said “you can’t do that”. It got a bit confusing at this point. My mates were backing me up. Two other cops were looking through a law book trying to work out if I was actually doing anything wrong and the cop who searched me kept saying if I didn’t give my details I would be arrested.

Eventually a legal observer came over. I tried to sum up the situation and ask for advice but by this point the cops had decided they were going to arrest me.