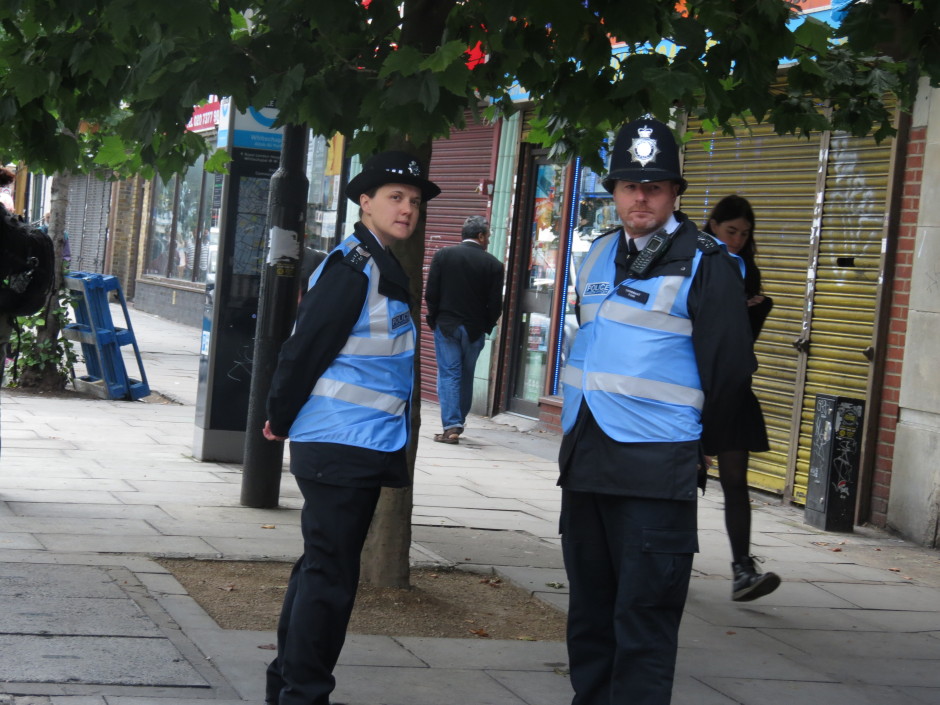 A review of Operation Mansell, the policing of last year’s anti-fracking protests in Balcombe in Sussex, has confirmed that blue-bibbed Police Liaison Officers, now routinely deployed at protests and demonstrations, are seen by senior police officers as playing a ‘pivotal role’ in gathering intelligence on protesters.

, 420 kB) by Hertfordshire Police and Essex Police was obtained following a Freedom of Information request by Ruth Hayhurst of the ‘Investigating Balcombe and Cuadrilla’ website. It was conducted as part of efforts by Sussex Police to prepare for future protests but also to share strategy with other forces around the country and “inform that planning process on a local, regional and national level”.

It confirms that a UK-wide policing strategy on unconventional energy protests is currently under development and recommends “lessons learnt” from Balcombe ”should be fed into the emerging national coordination on Fracking”.

Crucially, the review report also confirms that Police Liaison Officers (PLOs) played “a pivotal role in the operation” by “interacting with the protest organisers” and as a result, “there was intelligence, including open source, to suggest the protest would escalate” from 25 July 2013. The report is critical, however, of the way that this “was not utilised in an effective a manner as possible” and complains that it was unclear how PLOs fed back the intelligence they had gathered to their senior officers. The review report concludes:

This is a common issue with usage of PLO teams as a relatively new tactic within UK policing. Consideration of the deployment of a dedicated PLO Bronze may help ensure that important intelligence is appropriately considered within the command structure and that an appropriate intelligence sterile corridor exists between those who are engaging directly with protestors and command.

This is the latest confirmation of the role Police Liaison Officers undertake in intelligence-gathering at protests. It follows the release of Standard Operating Procedures by the Metropolitan Police in 2013 that says PLOs “are likely to generate high-quality intelligence from the discussions they are having with [protest] group members” and are expected to record and share this with “Bronze Intelligence for analysis and dissemination to Silver and the rest of the Command Team (in the same way as any other intelligence)”.

, 188 kB), such as the academic Clifford Stott’s ‘Crowd and Conflict Management’ consultancy firm, that PLOs can make a positive impact on protests if there are “transparent operational and structural divisions between PLTs and the criminal intelligence resources applied by the police to protests”. These divisions quite evidently do not exist, but only months before the Balcombe protests, Stott and colleagues insisted that despite ‘teething’ problems (such as PLOs visiting and threatening a Brighton activist at home in 2012), “the PLT in Sussex… displayed good practices and outcomes that have had a dramatic and positive impact on the policing of protest in Sussex in line with our arguments concerning their effectiveness”.

The vast majority of protesters at Balcombe, including the 126 who were arrested, would profoundly disagree.

The review report also recommends that increased public interest in fracking requires “more effective communications to the public of Sussex, and the release of information under the FOI” but goes on to suggest that during Operation Mansell, a “proactive Freedom of Information (FOI) strategy appeared to work effectively, nipping potential FOI in the bud”. What ‘nipping in the bud’ means is unclear, but in practice Sussex Police has flatly refused to release any documentation on the decision to impose Section 14 conditions at Balcombe.

Unsurprisingly, Sussex Police has also declined to reveal any information about its own Police Liaison Teams.

Netpol’s advice on Police Liaison Officers remains unchanged: they are part of a wider policing strategy to prevent and deter protest and activists should avoid contact with them at all times.