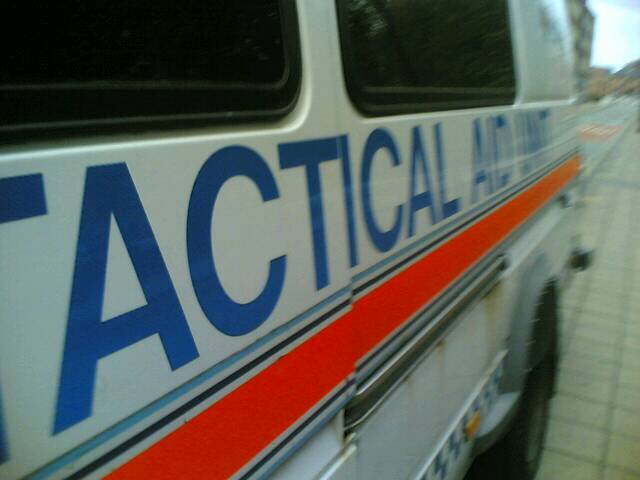 The headlines said an independent investigation into the policing of anti-fracking protests at Barton Moss in Salford had “cleared officers of brutality”. Netpol looks more closely at the report.

In March 2014, as a response to controversy over the policing operation at Barton Moss, Greater Manchester Police & Crime Commissioner Tony Lloyd set up an ‘Independent Advisory Panel on the Policing of Protest’. Its remit was to “provide strategic advice on how police manage major demonstrations” and on 16 October, it published the findings of its first investigation, into policing at the anti-fracking camp in Salford.

As the report acknowledges in its methodology, the Advisory Panel has no statutory powers and its investigation was “not intended to be a formal inquiry into the policing of the Barton Moss protest”. It is strange, therefore, that it has chosen to take such an emphatic position on the available evidence of ‘police brutality’.

Within the limitations of its remit, it was only possible for the Panel to adequately address this issue in its broadest sense – by examining whether strategic decisions about the level of force used by Greater Manchester Police (GMP) officers towards protesters were proportionate or excessive. The Panel lacked the resources to examine individual allegations of assault and, significantly, it seemed to lack the inclination to do so too. For example, there was no public appeal for witnesses to come forward – instead, the activities of the Panel were conducted behind closed doors and its meeting were not advertised publicly. Netpol has also confirmed that it failed to contact or seek evidence from Simon Pook, of the Manchester-based Robert Lizar Solicitors, who represented most of the 200 or so protesters who were arrested at Barton Moss and supported those who made formal complaints about violent and oppressive behaviour by GMP officers. This is important because, as a Freedom of Information request made by Netpol (

, 131 kB) has confirmed, 40% of the 77 complaints about the Barton Moss operation were specifically about the misuse of force by GMP officers.

Nevertheless, the report reached its conclusions on ‘police brutality’ by focusing entirely on limited individual testimony. It insists that because “no panel members witnessed any behaviour by police that could objectively be described as brutality” against protesters during their short visits to the protest site and “none of those we spoke to witnessed behaviour by police that could be categorised as violent” (by what measure is unclear), there was no brutality and “claims of police violence have not been substantiated”. Although widespread concerns about the treatment of protesters triggered the Advisory Panel’s creation, it opted not to consider whether the policing operation as a whole or the instructions given to officers on their legitimate use of force were consistent with the GMP’s Article 10 and 11 ECHR obligations – a subject many would expect a body charged with offering “strategic advice” might think was important.

The treatment of legal observers

This apparent lack of interest in the proportionality of the police’s tactics extends to GMP’s treatment of legal observers at Barton Moss. The report insists “there is no such position as legal observer” and that “it is unclear what the term means”, which for an Advisory Panel charged with offering guidance on protests shows a remarkable lack of knowledge and insight. Independent legal observers have monitored the policing of demonstrations since the 1930s and their role, monitoring and recording what they see and distributing basic information about legal rights, is widely understood and tolerated by police forces across the country.

While it is true that legal observers have no special legal status, are not immune from arrest and are far from neutral – they exist to support protesters, not the police – they are clearly identified, with orange bibs, as individuals who are not active participants in a protest. GMP officers in Bolton recognised this in June 2014, when they gave wide access and freedom of movement to legal observers from Green & Black Cross Manchester during a counter-demonstration against a far-right rally over the building of Astley Bridge Mosque.

A proportional policing operation would appreciate the distinctions between protesters, observers and bystanders. It would also properly assess the likelihood of serious public disorder by individual protesters who, the report accepts, were, “overwhelmingly peaceful” at Barton Moss. The Advisory Panel does manage to acknowledge that protesters were a diverse group but then fails to consider whether GMP Bronze and Silver Commanders recognised this in the planning and delivery of the operation. Disappointedly, the report fails to explore whether the unlawful arrest of a legal observer – a non-participant in the protest – and the prosecution that followed (charges were eventually thrown out) was in any way proportionate. Based on testimony we have gathered from protesters, what this case highlighted was the GMP’s failure to act fairly and its apparent policy of treating everyone at the Barton Moss site as a potential criminal. This is the reason why the incident contributed to a further breakdown in trust and respect for the police. However, the Advisory Panel instead brushes it aside as little more than an example of GMP’s failure to properly communicate its actions.

Indeed, the report expends considerably more effort on criticism of protesters for “crossing the line” than it does on analysing different elements of the police’s strategy at Barton Moss. It accepts without question the pejorative description, almost certainly made by the police themselves, of some as “hard line eco-activists” and “anti-police agitators”. It repeats unsubstantiated police allegations of alleged intimidation of IGas workers and local residents and castigates protesters for taking part in ‘lock-ons’ of vehicles. It notes without comment the GMP’s insistence that failures to communicate were due to protesters’ “unwillingness to engage” and that “significant efforts” were “thwarted at every point”, but neglects to then examine whether this was in any way true – or affected by the police’s own confrontational actions. It describes protesters’ condemnation of GMP as “the IGas private army” as “an unfair categorisation” without considering why protesters came to hold this viewpoint or the policing strategies that may have led to it.

Negative characterisation of protesters and their motives appears to have little bearing on any advice the Advisory Panel might meaningfully offer on improving future operations. It is likely to do little but further antagonise those who took part in the Barton Moss protests – almost certainly ensuring the report’s decision to exceed its remit, by making extraordinary ‘recommendations’ to protesters as well as to the police, is treated with contempt.

It is therefore unclear what any of this was intended to achieve, other than perhaps to provide a useful counterbalance to the report’s consistently generous descriptions of actions taken by GMP. There are two examples we must raise as cases in point: the first is the report’s description of the “compassionate and respectful way” that Police Liaison Officers behaved, which is wholly at odds with eye-witness testimony Netpol has received about these intelligence-gathering officers acting as ‘spotters’ to single out protesters for arrest.

The second is the now notorious “Flaregate” incident, which involved an allegation by GMP that a flare was fired at one of its helicopters and led two days later to an intensive search of the protest camp. This allegation has always been vehemently denied. The report insists that “it would be extraordinary if any such incident had been fabricated”, but this is exactly what protesters allege – and in the absence of any evidence, even now, the Advisory Panel’s suggestion that the police should simply have provided more information at the time seems a wholly inadequate way of convincing them otherwise.

Despite the Advisory Panel’s insistence that it was not conducting “a formal inquiry”, the report makes nine recommendations that go well beyond strategic advice to the police and propose actions for other public bodies to consider: perhaps to maintain some sense of ‘balance’. Time and again, the report suggests the influence on its drafting of Chief Constable Sir Peter Fahy, who had ‘final input’ on its wording before publication.

The report makes no criticism of the policing operation other than to recommend “more constructive communications and engagement”: having steered clear of examining the fairness and proportionality of the operation, there is little else it could propose. Even its suggestion to GMP that they “do more to recognise the diverse nature of those who take part in protests such as Barton Moss” is couched in the language of better ensuring “the reasons for the police being there are understood”.

As a result, the report represents a significant missed opportunity: in seeking to avoid criticising GMP in any way, it is unlikely to contribute anything towards serious reflection within the police about the way that a future protest of this kind is policed, or take any of the heat out of the fractured relationship between police and protesters in the Greater Manchester area. For the Advisory Panel itself, it has provided little evidence of genuinely robust independence and is likely to mean its future activities are treated by other protesters – such as those who took part in Palestine pickets in central Manchester over the summer – with deep and perhaps understandable suspicion.

Ironically, observers who have sat in on College of Policing training sessions for public order police commanders (which, from September 2014, now use an anti-fracking protest camp as the main training scenario) tell us that outside Manchester, amongst senior officers around the country, there is a general acceptance that GMP ‘dropped the ball’ at Barton Moss.

It says much about the need to strengthen local police accountability that the only public bodies still refusing to accept this are inside the city itself.