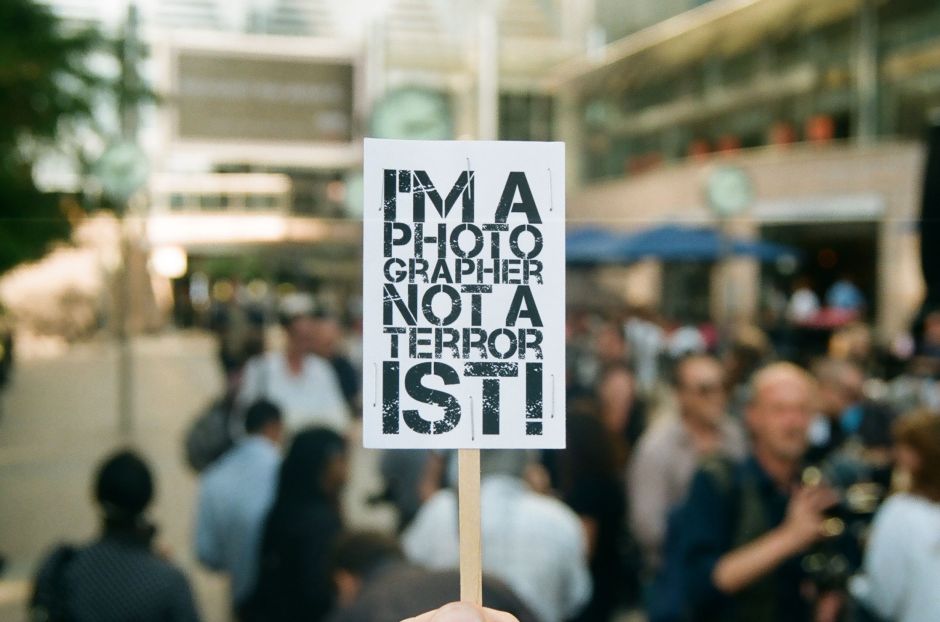 Evidence that the police may hold over 2000 records on journalists and photographers on an anti-terrorism ‘domestic extremist’ database raises more questions about proportionality, abuse of powers and the freedom of both the press and the public.

On Monday, The Times reported (£ paywall) on potential evidence of “more than 2,000 records relating to journalists and photographers on a confidential national anti-extremist database” known as Fairway, belonging to the Metropolitan Police’s SO15 Counter Terrorism Command. The article says:

“After a freedom of information request by The Times, police searched the database for the keywords “reporter”, “journalist”, “photojournalist” and “photographer”. The force declined to provide the exact numbers for each keyword or the precise total but stated that a combination of those searches revealed more than 2,000 records…

The police said it would be wrong to suggest each of the entries was about an individual journalist or photographer, saying many entries are “part of a wider record to accurately describe an event” such as recording who is present”.

The Times quotes Bob Satchwell, of the Society of Editors, who described the retention of files on journalists as “outrageous”.

Fairway is one of SO15’s major intelligence-gathering operations and its remit is to “detect, deter or disrupt terrorist activity” in three strands: Operation Lightning (identifying terrorists carrying out ‘hostile reconnaissance’ and infiltration); Operation Trammel (countering the use of forged documents) and Operation Camion (identifying individuals engaged in the theft or misuse of vehicles for terrorist activities).

For media organisations like the Society of Editors and the National Union of Journalists, it is the term “hostile reconnaissance”, as much as the retention of data itself, which should raise alarm bells. Operation Lightning sees ‘suspicious behaviour’ that might indicate evidence of preparations for terrorist activity, such as asking unusual questions or unfamiliar movement of people or vehicles near prominent or potentially vulnerable structures or buildings, as a reason for gathering intelligence data.

The problem is, asking awkward questions and turning up unexpectedly at public or crowded places is also the mainstay of legitimate journalistic activity.

Despite the police insistence that they only record names for the sake of thoroughness and accuracy, details about reporters and photographers are evidently turning up routinely on Operation Fairway’s database and, as we highlighted with Nina’s story on Monday, inappropriate intelligence-gathering can lead to officers making intimidating visits to journalists at home.

The Times’ report does seem to suggest that SO15 is making a sweepingly broad interpretation of what allegedly ‘suspicious’ behaviour it wants to gather and retain.

Unfortunately, it is incredibly difficult for individual journalists to find out of their work may have been inaccurately classified as possible “hostile reconnaissance”, because of the wall of secrecy surrounding UK anti-terrorism operations. It is even unclear how many people the police retain data about. The Times says there are over 2000 records on journalists, but as Netpol reported in April 2014, the response to a Freedom of Information request we submitted to the Metropolitan Police claims there are only 2627 individuals overall that have their own record (as opposed to a mention) on the national domestic extremism database – a number that seems to have dropped massively.

Since then, we have supported dozens of individuals who are currently making Data Protection Act ‘subject access requests’ to find out exactly what data is recorded about them. However, many are finding that after months of waiting, the police will neither confirm nor deny whether it holds any information.

It is wrong that journalists are targeted in this way. However, much like the misuse of anti-terrorism police powers that five years ago triggered the I’m a Photographer, Not a Terrorist campaign, it is the disproportionate harvesting of personal data on an industrial scale – and a readiness by unaccountable anti-terrorism policing units to make terms like “hostile reconnaissance” mean whatever they want it to mean – that is the core of the problem.