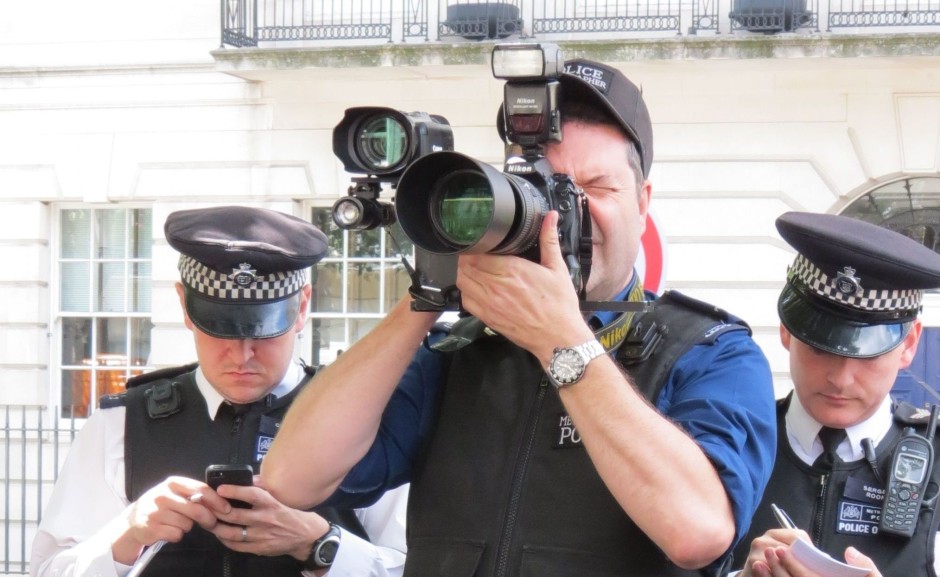 Today was the first of three days of legal argument in an attempt by the Metropolitan Police to overturn an earlier Court of Appeal decision that found the retention of a protester’s data was disproportionate and a breach of human rights legislation.

The case had originally been brought by Brighton peace campaigner John Catt, who has argued that police actions in taking notes on his attendance at political demonstrations and retaining them on a ‘domestic extremism’ database were a breach of his Article 8 right to respect for his private life. In May 2012, the High Court ruled against him, but this was reversed by the Court of Appeal in March 2013.

The Metropolitan Police argued in the Supreme Court today that officers should be free to collect and retain the personal data of people engaged in protest whenever they considered it necessary and legitimate to do so, and that the ‘mere’ retention of data did not breach privacy rights.

The legal arguments are complex but some of the main positions adopted by the police are summarised below:

Protesters have ‘no reasonable expectation of privacy’ when they take part in public demonstrations.

This is a contentious area and may become a key issue in the outcome of the case. While ‘reasonable expectation’ has been recognised as an important consideration in deciding whether privacy rights have been breached, a substantial amount of case law in the European Court of Human Rights (ECHR) has suggested that this is not the only valid test of whether there has been an interference in a person’s right to respect for their private life. Considerations could also arise where there is a systematic collection and retention of personal data, even if that data was taken from the public domain where there is no reasonable expectation of privacy.

The Metropolitan Police have suggested that none of the ECHR case law is ‘inconsistent’ with the ‘reasonable expectation’ test. Counsel for Home Secretary Theresa May (who also made submissions today) went further and suggested, without any trace of irony, that this idea – that the systematic retention of data could in itself be an interference in a fundamental right – was an ‘extreme position’.

In taking notes and photographs of demonstrations where there may be criminality or disorder, the police are doing only what they are expected to do.

The police appeared to suggest that because protesters now ‘expect’ to be photographed and filmed when taking part in political protest and demonstrations, this gives grounds for the claim that they have ‘no reasonable expectation of privacy’. However, as Lord Toulson pointed out, an expectation that you may be filmed and photographed is not quite the same as finding your details retained on a ‘domestic extremism’ database.

There is no support in case law for the idea that retention alone could be an interference with Article 8 rights to privacy.

The police suggested that if data is stored securely and safely, available only to the police, then this cannot be an interference with Article 8 rights. They suggested that an interference would only arise if the police took some further action, such as disclosing or publishing data. They conceded that people may feel uneasy or even distressed at the retention of their data for years on a police database, but that this did not mean it was a breach of their rights to a private life.

Individuals are entitled to control over their personal information – but people voluntarily give up some of those rights when they take part in public demonstrations.

Again, this is something of a tricky argument as it is unclear where the limits of this lie. Do we all cede our rights to control personal data the moment we step outside the door – or only when we take part in political protest?

That even if the retention of data was an interference in private life, this was justified by the need for the police to retain whatever data they consider necessary for police purposes.

Adrian Tudway, the National Co-ordinator for Domestic Extremism, had given a statement insisting that the need for surveillance is ‘obvious’. The Metropolitan Police have further claimed that if they are prevented from retaining data in any way they wished, this could undermine the changes made in the light of the Bichard report into the Soham murders.

The police say this means any further regulation or legislation is unnecessary. They specifically cited the Subject Access Request provisions in the Data Protection Act as an example of effective regulation – ignoring the fact that, as Netpol has repeatedly complained, the Metropolitan Police has consistently failed to meet legal standards for the disclosure of data.

John Catt was not a ‘nominal’ on the domestic extremism database and the data collected on him was therefore merely incidental.

The police maintained that the 66 entries containing information about Mr Catt and his daughter, including his behaviour, appearance, associations and even the car he drove, was just part of police practices in recording events. They suggested it was no different to recording the presence of the Home Secretary at a public event.

Tim Owen QC, Counsel for John Catt, had a few minutes at the end of today’s hearing to respond. He used the time to point out that, despite Metropolitan Police statements to the contrary, John had been consistently targeted as a ‘known individual’ and had been subjected to sustained and systematic surveillance and that ECHR case law was clear – that systematic collection and retention of personal information amounted to an interference in Article 8.