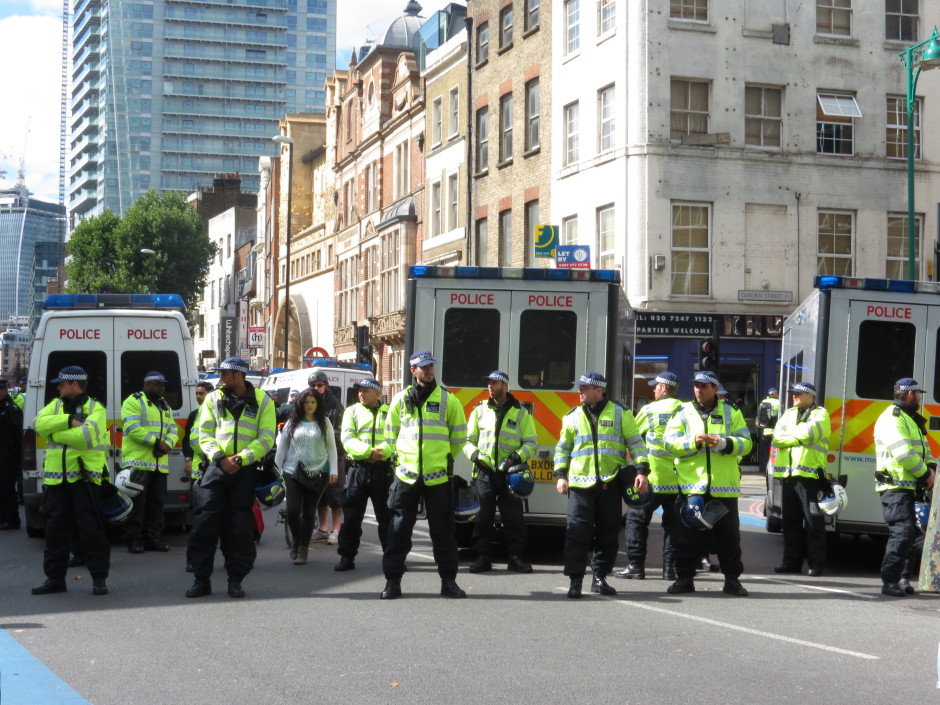 The Supreme Court ruling yesterday that the taking and retention of the personal data of John Catt was lawful may have significant consequences for the surveillance of political activism.

The judgment grants extensive discretion to the police in the operation of police databases, and in the collection of intelligence related to ‘domestic extremism’ or other protest activity. It is, in short, judicial approval for the mass surveillance of UK political activism.

The effect of the judgment will mean that it will not be necessary for the police to justify the collection and retention of data on a case-by-case basis, but that any information obtained through ‘overt’ means may be recorded and made available for further processing by police forces without the need for additional regulation or oversight. The Supreme Court found not only that the retention of John Catt’s data was necessary and proportionate, but also that the legal framework provided by the Data Protection Act 1998 (along with published guidance) was sufficient to meet ECHR requirements that the measure must be ‘in accordance with law’.

Lord Sumption, giving the leading judgment, considered the retention of John Catt’s private information amounted to merely a ‘minor’ an invasion of his privacy.  It was not ‘intimate or sensitive’ information, nor was it obtained by ‘intrusive’ means – instead it was about ‘overt activities in public places’. This ‘minor’ interference was therefore easily justified, in his view, by the need for police to have operational discretion to prevent and detect crime by collecting information at public demonstrations, and retaining that information on a domestic extremism database known as the National Special Branch Intelligence System.

He stated that the ‘fact that some of the information recorded in the database relates to people like Mr Catt, who have not committed and are not likely to commit offences does not make it irrelevant for legitimate policing purposes… [but the] longer term consequences of restricting the availability of this resource to the police would be very serious’.

Lord Toulson, in a sole dissenting judgment, pointed out that this ‘minor’ infringement included suffering the attention of a police unit concerned with ‘domestic extremism’ (then the National Public Order Intelligence Unit (NPOIU)), which retained over 60 written database entries relating to Mr Catt’s presence at various demonstrations over a period of five years. This occurred despite the fact that John Catt had never been convicted of any criminal offence, and that there was no evidence that he was ever involved in the coordination or planning of violent or unlawful protest, ‘or ever displayed any propensity for violence’.

Lord Toulson stated, ‘if a citizen’s activities are lawful, they should be free from the state keeping a record of them unless, and then only for as long as, such a record really needs to be kept in the public interest’.

The significance of today’s ruling is that it changes the basis on which the retention of data must be justified, from the individual to the general.  Applying the reasoning of the Supreme Court ruling, it is only the general purpose of the surveillance that must be justified as being necessary for (widely defined) ‘policing purposes’. In the case of John Catt, the justification included the need to assess risk to public disorder, and to study the ‘leadership, organisation, tactics and methods’ of the ‘extremist’ Smash EDO campaign, and to identify ‘links between protest groups’. Once the operation overall is justified, there appears no need to consider the relevance or necessity of recording the data of any particular individual – as was required by the Court of Appeal ruling in this case.  The change results in a much greater level of operational discretion being available to the police, which has the potential to open the door for the use of police data gathering tactics in relation to a much wider group of people.

To illustrate the point, imagine a scenario where local people set up an anti-fracking campaign in a rural village close to a drilling of a proposed new exploratory shale gas well:

Nationally, the police have identified opposition to fracking as a significant public order issue and so believe there is a likelihood of local protests outside the drilling site, though they do not know what form this might take.

In order to assess the risk that any protest might include some degree of obstruction of the site entrance or the public highway, senior officers decide to gather information through overt surveillance on all members of the campaign to establish its size, who is most active and most influential and what other groups, particularly undefined environmental ‘extremists’, local people identified as organisers are in contact with.

This involves officers attending a village hall meeting and noting what has been said, filming everyone as they leave, intimidating home visits to identified ‘leaders’ and logging the movements of activists’ vehicles as they go to and from the village. None of the people under surveillance has a criminal record – few have ever been involved in a campaign before – but this self-evident invasion of their privacy is justified as necessary “for legitimate policing purposes”.

As the surveillance expands from weeks to months, it is not long before the details of almost everyone over 16 in this close-knit local community has been added to the National Special Branch Intelligence System.

Alarmingly, our work alongside activists in the growing opposition to extreme energy extraction suggests this scenario may soon become entirely realistic. It is also why we are developing practical tools and advice so anti-fracking campaigners can resist this kind of intensive police surveillance.

The Supreme Court was also required to make a decision on whether intelligence-gathering practices were ‘in accordance with the law’.  Unanimously it was satisfied to adopt Lord Sumption’s view that a combination of the Data Protection Act 1998, and the recently updated guidance on the Management of Police Information (MoPI) issued by the College of Policing, provide enough certainty and accessibility in the law to meet the requirements of the European Court of Human Rights.

There are significant problems with this, however, that Lord Sumption does not properly address: neither document, for example, limits the circumstances in which data may be collected beyond the very wide parameters of that which is necessary for the ‘prevention and detection of crime’ (Data Protection Act) or for ‘police purposes’ (MoPI). Nor does either framework effectively limit the processing or use of personal data once it has been obtained and is ‘in the system’. As long as it meets the catch-all requirement that it must be ‘necessary and proportionate’ to a policing purpose, the data may be collated, analysed, or disseminated as the police see fit.

If, as seems likely, John Catt’s case makes its way to the European Court of Human Rights, it will be interesting to see what they make of this ‘accordance with law’ point.