Anti-fracking activists in battle of nerves with Surrey Police 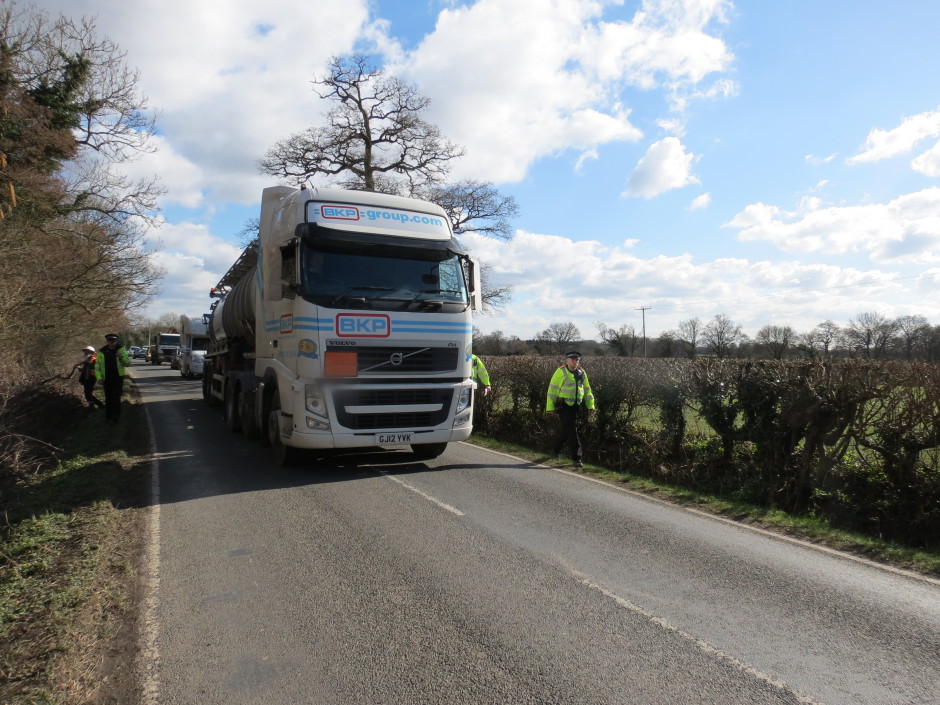 Opponents of the early stages of flow-testing for a potential fracking site near Horley in Surrey accuse police of deliberately disrupting their right to lawfully protest.

In early February, Surrey anti-fracking activists set up a small ‘protectors camp’ as a focal point for local opposition to the UK Oil and Gas exploration site at Horse Hill. Protesters have adopted a tactic used at other camps, by attempting to slow the pace of lorries entering and leaving the stretch of country lane between the A217 main Gatwick-to-London road and the site entrance.

However, campaigners have complained that, instead of ‘facilitating protest’, police constantly treat them like criminals even though their protest is peaceful and causes minor inconvenience and they are threatened with arrest even when they are not blocking the road. So far, 12 arrests have been made.

One activist told Netpol he attempted to negotiate an agreement with police that would allow their protests to continue safely, as the average of five to six lorries arrive and depart throughout the day. However, an inspector told him the camp was not a ‘peaceful protest’ because campaigners had not applied in advance in writing. Others complained that they had been pushed over by officers and that arrests had been unnecessarily aggressive – and one had beads cut from his hair when he was taken to a police station.

All felt that the officers had been told to adopt an uncompromising attitude to obstruction of the highway and there was no apparent consideration of their rights to freedom of expression and assembly.

When Netpol visited this week, we witnessed police officers warning protesters to move out of the road the moment a lorry arrived and they stepped out into it. As the offence under section 137 of the Highways Act 1980 requires proof of ‘wilful’ obstruction, the constant repetition by one officer of a legal warning, filmed by an Evidence-Gathering Team (EGT) colleague, was obviously intended to provide evidence that protesters are deliberately ignoring police instructions.

However, individuals were threatened with arrest when they were not standing in front of a lorry or were simply stepping off the uneven grass verge, on what is a minor road without a pavement. This included a journalist who was not part of the protest.

We also witnessed officers ignoring instances of reckless driving by lorries entering into Horse Hill, often at speed, which protesters say is common and that they fear could eventually lead to serious injuries. Several said they had been struck by vehicles.

We witnessed no arrests on the day of our visit, but protesters spoke of their constant uncertainty about what might trigger an arrest or what might simply lead to a warning: the presence of a legal observer, or larger numbers of protesters, appears to have an impact on this.

The problem facing the campaigners is that, as long as Surrey Police adopts a tough stance on obstruction, any attempt to test whether their protest activities are ‘reasonable’ – because they are over quickly and involve limited inconvenience to traffic – requires a legal challenge to officers’ actions.

Inevitably, this will happen long after people have been arrested, removed for a number of hours, had their right to protest disrupted and potentially receive pre-charge bail conditions preventing them from continuing to take part in it. Until there is such a challenge, however, the uncertainty will remain.

Protesters we spoke to expressed a strong sense of bitterness and frustration that the police’s idea of ‘peaceful protest’ is limited to essentially sitting at the side of the road with a placard and that anything beyond this receives a ‘robust’ response, one they say feels like harassment. It is little wonder that any attempt to engage with police liaison officers has ceased.

Protests are expected to continue for another week, until the initial testing phase of the fracking site is completed.