The right to freedom of assembly – what has changed over the last three years? 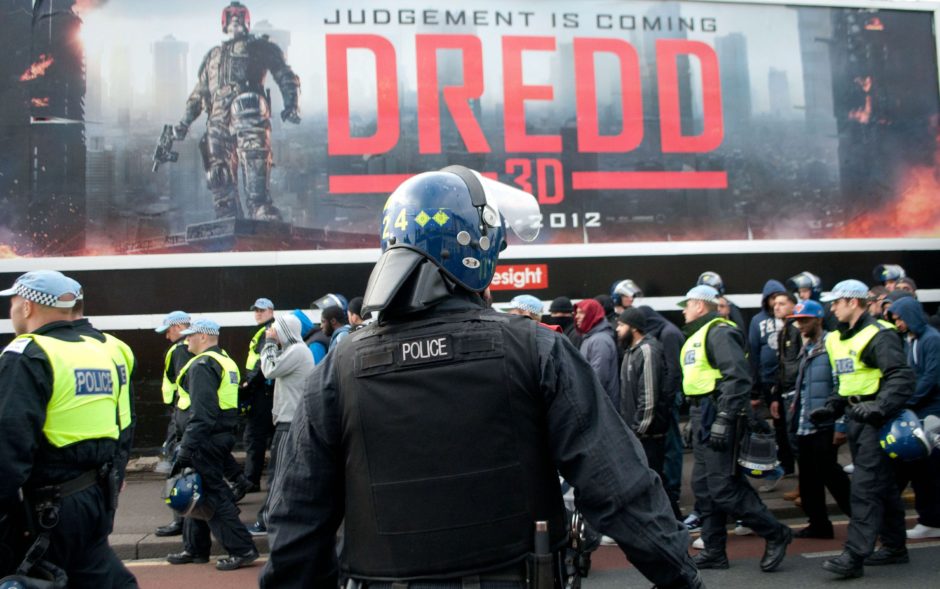 The UN’s Special Rapporteur Maina Kiai is visiting the UK next week. We assess what has changed in relation to the freedom to take part in protests – and what issues remain a concern – since his last official visit three years ago.

Netpol was one of a number of groups who met Maina Kiai, the UN Special Rapporteur on the rights to freedom of peaceful assembly and of association, when he last visited the UK in January 2013. His report on that visit was published in June 2013 [

Next week we are meeting him again. Here are some issues we think he should consider – and a reminder of how in a number of important respects, little has changed since his last report.

Excessive use of force

The Special Rapporteur’s visit in 2013 raised concerns about police violence against protesters, with Maina Kiai assured that authorities “had learned from past mistakes, and that every attempt is now made to meet the needs of peaceful protestors while respecting the rights of others”. In August 2013 – just two months after the UN report was published – we highlighted how force, not facilitation, was used by Sussex Police to restrain and often arbitrarily arrest anti-fracking protesters at Balcombe.

Violence against opponents of fracking was even worse at the camp in Barton Moss in Salford from November 2013 to April 2014, where there is evidence that the relationship between Greater Manchester Police and the site operators IGas was so close that a district judge described the force as “acting as civil enforcement officers” for the company. In August 2014, Greater Manchester Trades Council condemned the force’s Tactical Aid Unit (TAU) as ‘unfit for purpose’ over its conduct at Barton Moss. When cases came to court in 2016, the acquittal of defendants was largely based of the lack of any warning or rationale by the TAU for adopting more aggressive tactics.

In February this year, a comprehensive report on Barton Moss by researchers from Liverpool John Moores University and the University of York highlighted evidence that “violent behaviour and harassment were central features of the policing operation” with several women reporting “sexualised violence by GMP officers”.

In 2013 the Special Rapporteur highlighted concerns about overt and covert intelligence-gathering by the police at protests, adding that he found the retention of personal details about peaceful protestors who have committed no offence “particularly disturbing”. “Another area of concern”, his report added, “is the definition of ‘domestic extremism’, which is too broad”.

Over the last three years, there have been repeated incidents where campaigners have been targeted for their alleged ‘extremism’. In January 2014, we reported on a police officer who identified himself as part of Scotland Yard’s Counter Terror Command accosting an anti-NATO activist while she waited at the bus stop. In June that year, it was revealed that personal details about the Green Party politician Jenny Jones were included on the police’s national ‘domestic extremism’ database. The following month, we reported on counter-terrorism police approaching the parents of a student arrested during a protest at Birmingham University, asking to discuss ‘concerns’ about his behaviour.

In late 2014, the mother of a young anti-fracking campaigner had a similar experience with counter-terrorism police visiting her home to ask about her son’s alleged “involvement with extremists”. Last year, we were we were contacted by anti-fracking activists who were reported to the government’s Prevent anti-radicalisation’ programme because their legitimate campaigning activities were deemed “non-violent extremism”. We also received an audio recording of a counter-terrorism officer at a Workshop to Raise Awareness of Prevent (WRAP) training event making lurid allegations about anti-fracking activists and other campaigners and branding them ‘domestic extremists’.

Although there was an attempt by the police to try to formulate a new “working definition” in 2014, what these incidents point to is that the label of “domestic extremist” can mean whatever officers want it to – not least because the Regulation of Investigatory Powers Act test for ‘serious criminal activity’ includes “conduct by a large number of persons in pursuit of a common purpose”, a textbook description of almost any protest.

Netpol remains opposed to all police surveillance on political activism and supported the UN Special Rapporteur’s call in 2013 for authorities to “instruct police officers that peaceful protestors should not be categorized as domestic extremists”. However, the freedom to assemble without constant, intrusive intelligence-gathering was severely undermined by a conservative judgment by the UK Supreme Court in 2015. This overturned an earlier decision, welcomed by Maina Kiai, that retaining data on Brighton campaigner John Catt was unlawful. We have described this ruling as “judicial approval for the mass surveillance of UK protest movements”.

Assessing the increasing deployment of Police Liaison Officers (PLOs) at protests, Maina Kiai’s report in 2013 said that “in order for the protest liaison system to function properly, the Special Rapporteur stresses that it is necessary to separate the liaison function from intelligence gathering”. Over subsequent years, the opposite has happened.

In October 2013, a Freedom of Information request by Netpol revealed that standard operating procedures in London fully expected that PLOs were “likely to generate high-quality intelligence from the discussions they are having with group members” and insisted this information was “passed to Bronze Intelligence for analysis”. In June 2014, a review of anti-fracking protests in Balcombe in Sussex confirmed that senior commanders saw their Police Liaison Officers playing a ‘pivotal role’ in gathering intelligence on protesters. Information that police had spied on protesters only came to light because the internal document released to the public was so poorly redacted.

After denying repeatedly that PLOs are used for intelligence-gathering, the police have relented and now generally accept that this is normal but ‘incidental’ to their main role. As a result, however, one of the most significant shifts since 2013 has seen those protesters the police are most keen to liaise with – individuals engaged in civil disobedience and non-violent direct action – refusing any contact with PLOs, due to understandable concerns that anything they say is likely to be used to disrupt and undermine their protests.

It is our view that, except in the limited number of pre-negotiated marches where there is little prospect of arrests, police liaison has failed completely.

The tactic of mass arrests has been used repeatedly over the last three years, from the anti-fracking protests in Balcombe and Barton Moss to a demonstration in Whitechapel in London against the far-right in 2013, where 286 arrests were made, and a solidarity action at Westfield shopping centre in 2014 in support of US campaigns against the killing of black people by the police, where there were 76 arrested. There is now ample evidence that the use of this tactic was primarily to gather intelligence about the protest movements organising these public assemblies: the large number of arrests have resulted in a disproportionately small number of charges or successful prosecutions.

The same is true of stop & search powers: in June 2014, we highlighted the abuse of these powers at a Brighton anti-fascist counter-demonstration, where legal observers from Green and Black Cross noted police frequently threatening to arrest protesters who asserted their right to withhold their name and address. Police were also using powers under anti-social behaviour legislation to target individuals based on the way they were dressed. We argued at the time that Sussex Police were carrying out de-facto ID checks to gather intelligence, without the legal authority to do so. At another demonstration in 2015, this time in South Wales, evidence that police were exceeding their powers by inventing “reasonable grounds” for suspicion to undertake stops and searches was captured on video.

In February 2015, we reported on how the organisers of a series of planned protest marches had been forced to come together and publish a joint statement rejecting efforts by the Metropolitan Police to impose crippling costs on their demonstrations to cover commercial security and traffic management – costs that would have made their rights to assembly unaffordable.

This was not the first time an attempt had been made to impose such conditions: in October 2014, the joint organisers of an anti-Trident demonstration were told they had to hire a private firm to steward the protest and to undertake the traffic management plan. Police said the Campaign for Nuclear Disarmament’s fifty years experience of stewarding was no longer suitable and campaigners were expected to hire an ‘approved’ firm.

The police tried to place similar restrictions on a housing demonstration in London in early 2015. Having refused to comply with additional costs, the chief steward told Netpol about concerted pressure placed on him, not because of arrests during his march but because of a further protest that took place after it had ended. He said that senior officers “suggested that we had lost control of the demonstration and that this would be born in mind if we were planning to hold similar events in the future”.

The introduction of new powers under the new Anti-social Behaviour, Crime and Policing Act 2014 has led to the dispersal of individuals taking part in legitimate assembly, in ways that had specifically concerned Parliament when the legislation was introduced. Unfortunately, reassurances that legislators received have proven inadequate.

In November 2014, Merseyside Police imposed a dispersal order against anti-fur activists in Liverpool city centre – despite the fact that they were not even protesting at the time. The same force also used section 35 powers that month against a peaceful anti-fascist counter-demonstration opposing a National Front ‘day of action’ – even though the far right group failed to show up.

In February 2015, dispersal powers were used against housing activists occupying empty flats on the Aylesbury estate in Southwark. Activists who have tried to provide support for homeless people have also faced criminalisation. In February 2016, two housing campaigners were eventually cleared of charges of failing to comply with a Section 35 notice during a protest in 2015 that occupied a former bank in Liverpool. A month earlier, opponents of a proposed fracking well-site in Cheshire were given section 35 dispersal notices when their protest camp was evicted and they were excluded from a wide area, apparently for no other reason than to disrupt their efforts to protest against the eviction. Most recently the veteran peace activist Lindis Percy, who campaigns against the American air base at Menwith Hill in North Yorkshire and holds a weekly one-hour vigil outside it, was arrested and charged because her long-standing, entirely peaceful protest was suddenly designated ‘anti-social’.

It is Netpol’s view that the misuse of section 35 dispersal powers must result in their repeal.

One of the recommendations made by Maina Kiai was that “law enforcement officers should wear identification badges at all times”. However, we have been informed of numerous occasions, particularly involving Greater Manchester Police, where the force’s uniform policy is ignored. There is no legal requirement for displaying ID: it is a matter for individual Chief Constables. It is time that this changed and that a failure by unformed officers to wear visible identification becomes unlawful.

Recommendations for the UN Special Rapporteur

Netpol urges Maina Kiai to make the following recommendations to the UK government: