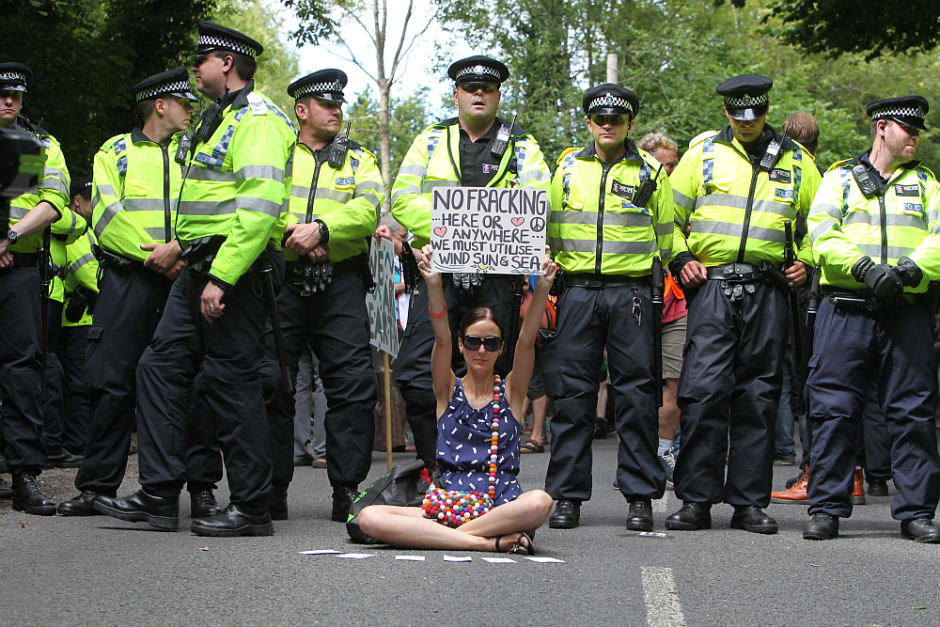 It is deeply disappointing that within a matter of moments following yesterday’s planning decision by county councillors to approve fracking in Ryedale, North Yorkshire Police promised a crackdown on future protests. Its pre-prepared statement said that it plans to take “appropriate action against those who break the law” and “not tolerate criminal behaviour and we will ensure public order is maintained.”

Raising the temperature of an already fraught and emotive debate with an unnecessarily inflammatory press release is unhelpful. It is also another indicator of all too commonplace and negative assumptions by police about what have always been overwhelmingly peaceful anti-fracking protests.

It is this attitude that leads directly to the kind of costly and disproportionate policing operations Netpol has documented over the last three years, involving large numbers of officers and intensive surveillance on campaigners who are simply trying to exercise their rights of assembly and freedom of speech.

Police & Crime Commissioners (PCCs) can play an important role in effectively scrutinising the human rights compliance of policing operations in their areas. Netpol is therefore calling on North Yorkshire’s PCC Julia Mulligan to consult widely with the public, and in particular those opposed to fracking, to draw up and publish a clear set of standards and expectations, agreed by the Chief Constable, on how North Yorkshire Police will exercise its positive duty to protect the right to participate in protest against fracking.

This should address concerns about large-scale intelligence-gathering, decisions that lead to the unfair and arbitrary categorisation of protesters as alleged ‘extremists’ and the subsequent use of increasingly coercive and aggressive tactics against them.

We also strongly recommend that activists in North Yorkshire and elsewhere start to develop and expand their knowledge and awareness of their fundamental legal rights. Netpol has produced extensive guidance, available on our website, and can help with training and support.

In our experience, making sure campaigners understand their rights, have trained legal observers at their protests and can access solicitors with extensive experience in public order law is essential for resisting attempts to undermine anti-fracking activism.

Otherwise, the actions of the police can take an increasing amount of time and energy away from the main focus on the onshore oil and gas industry.

If you live in North Yorkshire, ask Crime Commissioner Julia Mulligan to accept Netpol’s call for clear standards and expectations, agreed by the Chief Constable, on how police will exercise their positive duty to protect the right to participate in protest against fracking.