How transparent is the policing of anti-fracking protests? 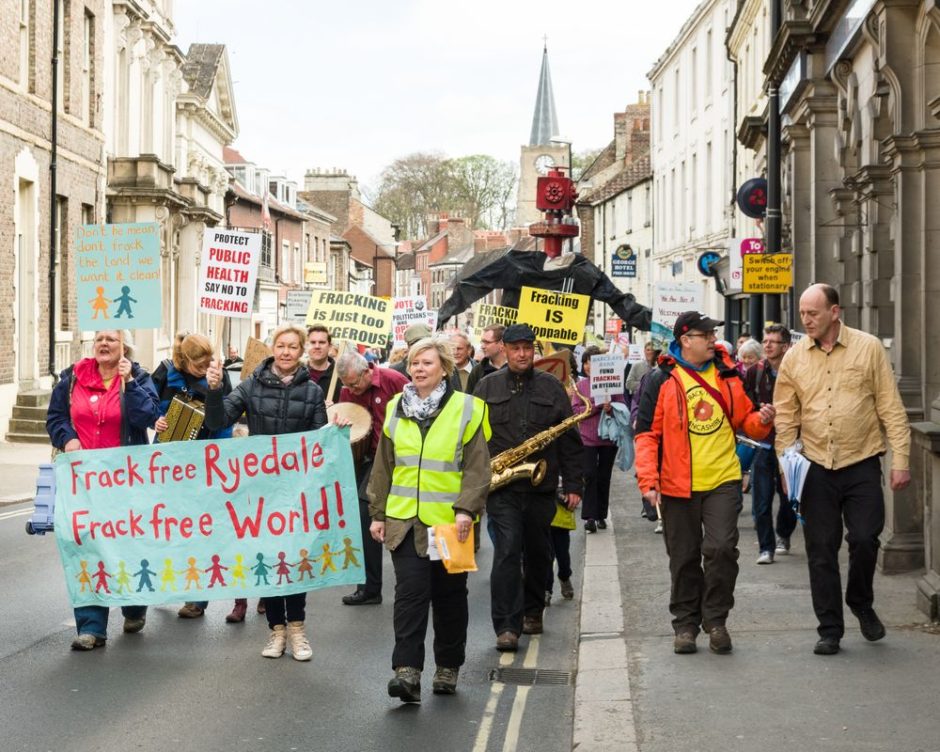 The interests of energy companies are widely perceived as taking priority over the rights of protesters.

Nearly a year after we first raised concerns about new guidelines on the policing of anti-fracking protests, we have finally had some answers to questions we raised with the National Police Chiefs Council (NPCC).

In the last of four posts, we examine what the NPCC’s response tells us about the level of transparency of policing operations involving anti-fracking protests.

For policing operations conducted, according to police commanders, with public consent, the question of transparency – and therefore their accountability – is a fundamental one. It is particularly important for anti-fracking protests where the police’s conduct has invariably become far more controversial than that of the protesters.

The guidance issued by the National Police Chief’s Council in 2015 acknowledged that “within the short to medium term, most Police Force areas may see some form of oil or gas exploration activity and, therefore, the likelihood of protest”. It said its intention was to “bring together the lessons learned from previous policing operations, to support operation planning and decision-making and to promote a consistent approach”.

Yet, when faced with questions from Netpol about the document, the NPCC has fallen back on opaque answers and deliberate obfuscation.

On core controversies including the scale of policing operations, deploying undercover officers, the use of body-worn cameras, social media intelligence gathering and what happens if protesters refuse to engage with Police Liaison Officers, the response is the same: it is up to the police commander on the ground.

This is not promoting a ‘consistent approach’, but rather a fragmented one, offering little indication of what anti-fracking protesters can expect from one area to another.

As a result, campaigners must attempt to pry information from their local force, which is often difficult and extremely frustrating. Data protection requests for details held about individuals invariably results in the police refusing to ‘neither confirm nor deny’ they hold information, especially about surveillance.

The Freedom of Information Act also provides a specific exemption, under section 31, for disclosures that might “prejudice the prevention or detection of crime”. Thus, when Rathlin Energy insisted in 2014 that it had been “asked by the police to deviate from the Traffic Management Plan” for its site at Crawberry Hill “because of protester activity”, Humberside Police refused to tell us what this meant because it was “tactically sensitive” and therefore exempt.

Similarly, Surrey Police refused to disclose to us the risk assessment it carried out on the safety of people taking part in protests at Horse Hill, its traffic management plan or its community impact assessment because the documents “also contain police tactics”. This was in spite of repeated concerns about the dangers posed to demonstrators by dangerous drivers on the busy road to the drilling site and the refusal of officers on the ground to intervene.

We suggested to the NPCC that it made sense and would avoid surprises if local forces indicated the kind of documents they were likely to publish in order to comply with obligations under freedom of information legislation. The NPCC is clearly in a position to offer guidance and clarity on this. Instead, it replied by pointing us to its own Publication Scheme. Whether deliberately obstructive or simply incompetent, this was not a particularly helpful response.

What Freedom of Information requests have managed to reveal is an increasing reluctance by forces faced with anti-fracking protests to enter into formal ‘memoranda of understanding’ with the oil and gas industry that they are later obliged to publish. Earlier releases of the details of such documents at Balcombe in Sussex and Barton Moss in Salford may have contributed to this: the level of evident collaboration and cooperation with energy companies contradicted claims that the police were always impartial.

When we asked about the extent of industry access to police operational decision-making, contributions to media strategy and cooperation on intelligence sharing, the NPCC was evasive. Once again, it is “a matter solely for the commander” in charge of the local operation.

There are hints that companies are likely to receive briefings but the NPCC has avoided clarifying who will sit on the ‘operation specific multi-agency communications groups’ proposed in last year’s guidance. Whilst the NPCC insists police will not share information with other organisations, we are no closer to knowing how local forces will make use of and retain intelligence such as video footage that is gathered by the oil and gas industry itself.

If the national body responsible for coordination of policing operations will not provide meaningful answers, campaigners must inevitably look elsewhere. With the NPCC insisting that most decisions are made by the ‘ commander on the ground’, it is at this level that demands for transparency are likely to have the most impact.

Netpol has previously called on campaigners to apply pressure upon their locally elected Police and Crime Commissioners, who are in a position to provide clear, published standards and expectations on how the police will exercise its positive duty to protect the right to participate in protests against fracking.

As well as addressing fundamentals including the scale of intelligence-gathering and the use of increasingly aggressive tactics against protesters, Police and Crime Commissioners can insist that local forces publish information about operations more often than they hide behind legal exemptions.

They can – if they have the political will – provide local people with an opportunity to hold the ‘commander on the ground’ to account.

This matters because central to each of the four posts we have published recently on the policing of anti-fracking protests is an absence of transparency and the persistent refusal of the National Police Chiefs Council to respond to legitimate questions. Nothing in the responses we received is likely to change the widely held perception that the interests of energy companies take priority over the rights of protesters.

This is a long way away from what most people will recognise as ‘policing by consent’.