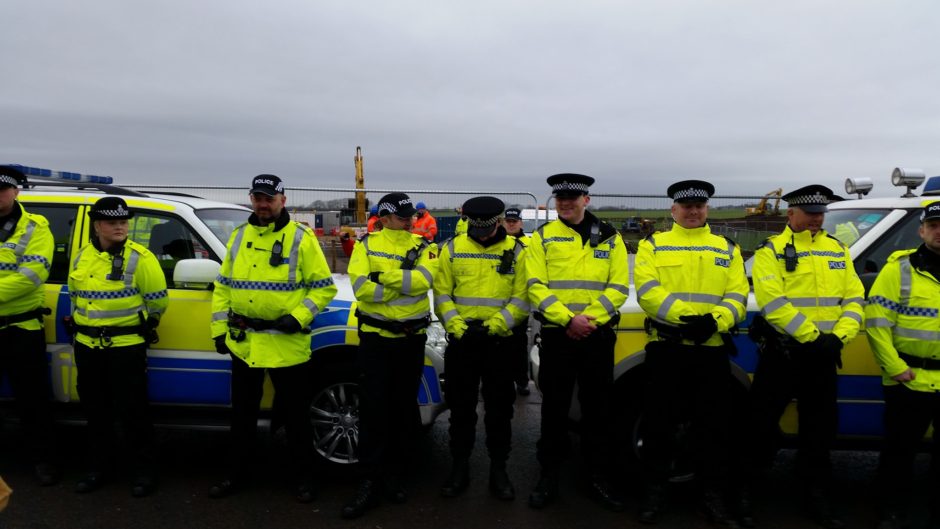 Video evidence of an assault on Tuesday by a Lancashire Police officer on a Fylde borough councillor, Roger Lloyd, points to an escalation of more ‘robust’ and aggressive tactics by police against anti-fracking protests at Cuadrilla’s shale gas exploration site near Blackpool.

This is the latest in a series of decisions made by local police that is likely to make it more difficult for protesters to know with any certainty what treatment they are likely to receive and whether police will genuinely protect their right to protest.

Prior to protests starting in January at the Preston New Road site, some members of the Residents Action on Fylde Fracking (RAFF) group had met regularly with Lancashire Police. The idea of a designated ‘protest area’ was rejected by local campaigners. Conditions to allow the delay of lorries approaching the site using ‘slow-walking’ tactics for up to fifteen minutes were proposed by police as a part of traffic management plans.

Over the subsequent weeks, the police presence has often been large but most arrests were for alleged breaching of conditions imposed by the police on a public assembly, rather than for obstruction of the highway that has been common at other anti-fracking protests. These arrests have followed a series of non-violent direct actions involving protesters locking themselves to fencing outside the entrance.

This relatively low-key approach by Lancashire Police appears to have shifted with last Saturday’s national day of anti-fracking action that included a solidarity rally at the Preston New Road site.

On the day, the police issued a statement about “a significant number of protestors” who had attempted to “breach the fencing and to gain access to the site”, leading to the closure of the road. It added, that “those engaged in the behaviour are largely thought to be from outside the area and not from the local protest groups”. This was reported locally as police blaming “out-of-town protesters”.

Distinguishing between individuals or groups solely on the basis of their locality and seeking to point the finger at ‘outsiders’ was a concern we raised back in 2015 over the national guidance on the policing of anti-fracking protests issued to local forces.

In practice, local groups are actively seeking out and welcoming national groups and individuals from other regions. They are likely to see the police treating ‘out of town’ protesters differently as attempts to deliberately undermine offers of support. We argued:

Differentiated policing can create problems for protest groups and for the wider protest movement, as it can foster distrust within (and between) protest groups, encourage division and decrease solidarity and mutual support. The police, however, may see such division as useful in isolating ‘risk’ groups and enabling them to target more ‘robust’ policing on those they believe pose a risk of criminality.

In any event, the day itself was peaceful, there were no arrests and Frack Free Lancashire (FFL) has disputed the police’s statement, describing it as a “factually incorrect representation of what happened”.

In a press release, FFL said the numbers entering the site were much smaller than claimed and rejected the idea that any fencing was forcibly “breached”. They argue Lancashire Police’s concerns about people’s behaviour is significantly undermined by images of its own officers appearing to help protesters clamber through a gap in the hedge.

FFL added that it was “disappointed with the number of officers deployed by Lancashire Police” and an “unnecessarily oppressive line of police and security guards blocking Cuadrilla’s site”.

Since the weekend, there have been new complaints that the previous agreement on slow-walking has suddenly changed without warning. Another first-time protester has described anonymously how decisions about how and where demonstrators can or cannot protest seem increasingly arbitrary. This appears to have escalated further with the aggressive police response that led to the assault on Cllr Lloyd.

This is a scenario Netpol warned about in the ‘Protecting the Protectors’ report we produced last year. Campaigners are faced with continued uncertainty about the policing operations in response to their protests and whether they are likely to face the possibility of arrest. This is often coupled with sudden ‘zero-tolerance’ attitudes to minor disruption.

We have argued that even when negotiations take place between police and protesters, there are seldom any commitments from the police themselves on the steps they will take to genuinely protect the right to protest, or on their own conduct and strategic decisions.The focus is always on the conduct of protesters.

That is why we have called for local Police and Crime Commissioners (PCCs) to draw up local plans that offer a clear set of minimum standards and expectations about the policing of protests.

We wrote to the Lancashire PCC Clive Grunshaw in November 2016 called on him to ensure transparency in the way anti-fracking protests are policed in his area. We are still awaiting a reply.

This article was amended on 22 March 2017 to make it clear that, although meetings with police had taken place prior to the start of protests in January, local groups did not agree to a ‘protest area’ (proposed by Cuadrilla) and that police conditions allowing facilitated slow walking was initiated by Lancashire Police as a means of ensuring protesters’ safety.