Police and fracking companies – STILL in each other’s pockets? 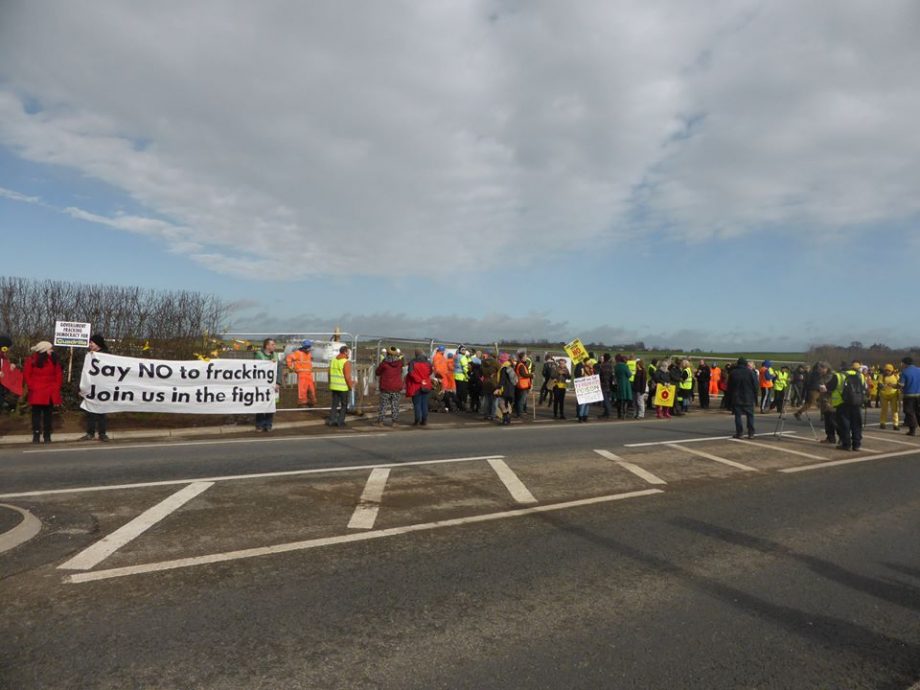 Since we highlighted, at the beginning of March, the increasingly confrontational operation by Lancashire Police against anti-fracking campaigners at Cuadrilla’s Preston New Road site, more protesters have complained of violence and officers pushing them towards busy traffic.

This escalation in aggressive police tactics has coincided with a campaign of pressure from supporters of the onshore oil and gas industry, conducted mainly through the pages of the Times newspaper, which has called for the police and courts to respond more robustly towards the anti-fracking movement.

On 11 March, the Times reported (£) that “after complaints to the Home Office by local pro-business leaders, Lancashire Police are taking a tougher line with the protesters, some of whom are anti-capitalist activists.”

On 21 March, the Times published allegations (£) that “anti-fracking protesters have adopted the tactics of animal rights extremists by targeting employees and suppliers of shale gas companies”, included claims of “activists filming vehicle registrations” and using “hostile reconnaissance”. No local anti-fracking groups were approached by the newspaper to challenge these serious but unsubstantiated allegations and it chose the most sinister-looking photo possible to accompany the story, taken at a protest several years ago in a different part of the country.

Netpol has asked both Lancashire Police and the Home Office for copies of correspondence from local business organisations and any subsequent or resulting contact between the Home Office and local police.

These alleged threats from “extremists” (and referencing in particular associations with animal rights and anti-capitalist groups, two favoured targets of secretive police intelligence-gathering units) are far from subtle: astonishingly, the GMB’s press release even calls for a “crackdown on fracking activists”.

For campaigners at Preston New Road, however, it must seem as though this industry pressure is already having an impact on policing on the front line. This can only further damage the credibility of Lancashire Police’s insistence it will “ensure a balance between the rights of people to lawfully protest, together with the rights of the wider public, including local businesses”.

What seems to have triggered the latest, rather lurid claims against protesters is a planned ‘Break the Chain‘ fortnight of solidarity action by the national ‘Reclaim the Power’ (RtP) network, starting on 27 March. In response, RtP has condemned attacks from business groups as an attempt to “distract from the fact that the industry doesn’t have public backing” and reminded them that RtP’s action guidelines prioritise safety and treating workers with respect.

Although the most recent Times report was at pains to note that “there is no suggestion that RtP or its members have been involved in noting down drivers’ number plates”, it does seem that pro-fracking interests are trying to drive a wedge between local groups and national supporters and attempting to encourage the police to treat ‘outsiders’ differently. Lancashire Police has already tried to blame an incursion onto Cuadrilla’s site during RtP’s “solidarity day” on 25 February as behaviour by protesters “largely thought to be from outside the area and not from the local protest groups”.

Our concern is that the police will respond to industry pressure with precisely the kind of operation that has previously targeted animal rights and anti-capitalist activists, including intrusive surveillance, use of blanket stop and search powers to look for “offensive weapons” and zero-tolerance of even the most minor disruption.

We are also worried about any false characterisation of protest as “anti-social behaviour”, which would provide a justification for using stop and search powers that require individuals to give their personal details and for the use of draconian dispersal powers to ban protesters from an area for up to 48 hours, under the threat of arrest for refusing to comply. In January 2016, opponents of a proposed fracking site in Cheshire were given ‘section 35’ dispersal notices when a protest camp was evicted and police attempted to exclude them from a wide area, apparently for no other reason than to disrupt their efforts to protest against the eviction. A year ago, campaigner Lindis Percy who holds a weekly one-hour vigil outside the American air force base at Menwith Hill was arrested and charged using section 35 powers because her long-standing – and entirely peaceful – protest was suddenly designated ‘anti-social’. She was acquitted at a trial in September 2016.

The police have a legal duty to protect the right to freedom of assembly but so far, Lancashire Police has failed to offer campaigners any transparency about the way local anti-fracking protests are policed. Next week’s protests are therefore a crucial “impartiality test” for Lancashire’s new Chief Constable Andy Rhodes and for Police & Crime Commissioner Clive Grunshaw.

How far the police are prepared to bend to pressure from corporate interests – and how much has really changed since protests in Barton Moss in 2014, when the police and fracking companies were seen as in each other’s pockets?