‘Protecting the Protectors’ is Netpol’s campaign to raise awareness and encourage debate amongst elected representatives and in the media about the pressing need to change policing strategies on anti-fracking protests. This area of our work is funded by the Joseph Rowntree Reform Trust.

Our aim is to

The ‘Protecting the Protectors’ report 2016 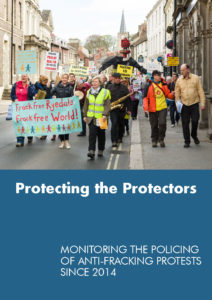 In November 2016, Netpol published a report, ‘Protecting the Protectors: Monitoring the Policing of Anti-Fracking Protests since 2014’, which summarised our activities, findings and analysis of the policing of protests against fracking since 2014.

Drawing extensively on discussions with anti-fracking campaigners, as well as our own observations at prospective fracking sites, the report covers our

We argued that the way policing operations are planned for anti-fracking protests, the scale of intrusive surveillance against campaigners and ‘zero tolerance’ attitudes towards civil disobedience has a cumulative ‘chilling effect’ on freedoms of assembly and expression.

You can download a copy of the report here [

We are seeking a commitment from every Police and Crime Commissioner (PCC) with an onshore oil and gas extraction licence block in their area to engage with the public and their Chief Constable to draw up and publish a clear set of standards and expectations on how police will exercise their duty to protect the right to participate in protest.

Our Guide to lobbying PCCs is available here [

In December 2016, Keith Taylor, a Green Party MEP for South East England, wrote to the PCCs for Surrey and Sussex urging them to draw up and consult on local plans that offer a clear set of minimum standards and expectations about the policing of protests.

Disappointingly, in July 2017 the Lancashire Police and Crime Commissioner, Clive Grunshaw, falsely describing Reclaim the Power, who provided a month of continuous support to local campaigners. as “professional protesters” and insisting that any aggression was “not coming from the police officers”. This is exactly the opposite of what local people have told Netpol. The comments by Grunshaw are included in this segment on ‘That’s Lancashire’:

We are seeking to convince the National Police Chiefs Council – the body representing senior police officers, which was formerly called ACPO – to amend its existing and deeply flawed guidance on the policing of anti-fracking protests. We then plan to lobby nationally over the practicalities of its implementation at a local constabulary level.

In particular, we want the NPCC to address concerns about the scale and intrusiveness of intelligence-gathering, the unfair and arbitrary categorisation of some protesters as ‘extremists’ and the subsequent use of more coercive and aggressive tactics against them. This will include a specific call for police not to deploy body-worn cameras at anti-fracking protests, in the interests of developing more positive relationships between protesters and police.

The current NPCC guidance was sent out to national anti-fracking networks. The guidance document, ‘Policing linked to Onshore Oil and Gas Operations’, is available here [

Netpol produced a detailed briefing setting out eighteen questions for the NPCC that we feel anti-fracking groups have every right to an answer to.  Our briefing is available here [

The conference took place in Derby and a copy of our presentation is available here.  On the day following the conference, we were told that the NPCC intended to review its guidance and respond to the questions we had raised the previous year.

Five months later and after much prodding, we finally received a reply to our briefing from Norfolk Assistant Chief Constable (ACC) Sarah Hamlin of the NPCC’s National Protest Working Group. Unfortunately, this response amounted to a series of opaque and largely unhelpful comments on the deployment of undercover officers and Police Liaison Officers and on the level of transparency of policing operations involving anti-fracking protests.  The NPCC also rejected our concerns about the use of body-worn video cameras at protest sites.

Keith Taylor MEP wrote to the NPCC asking how they planned to review the current guidance, when they expected to complete the process and who they were planning to consult. A copy of his letter is available here [

A response from Humberside Chief Constable Justine Curran, the NPCC’s National Lead for Public Order and Public Safety, confirmed that the review would take place as soon as a new NPCC Lead on Shale Gas and Oil Exploration had been appointed. A copy of the response is available here [

After prompting the NPCC again, Thames Valley Assistant Chief Constable Chris Shead, the new National Lead for Public Order and Public Safety, confirmed to Netpol that a Lead on Shale Gas and Oil Exploration had been appointed. This post is held by Lancashire Assistant Chief Constable Terry Woods – a senior officer responsible for policing on the frontline of resistance to fracking.

Keith Taylor again wrote to the NPCC asking for progress on the review.  A copy of his letter is available here [

Keith Taylor wrote to ACC Woods again, suggesting broad questions the NPCC might want to seek responses. A copy of his letter is available here [

After receiving a letter from ACC Woods indicating that there is no formal deadline for the review and that it seems to have no clear terms of reference, Keith Taylor again suggested key questions and seeking responses to them by March 2018. A copy of his letter is available here [

Netpol wrote to ACC Woods insisting on the need for a proper, meaningful consultation process, one with a clear remit, questions publicised on the NPCC website, a reasonable deadline and a single point of contact for submissions. A copy of our letter is available here [

Later in March, Netpol delivers a petition signed by over 1200 people from around the country, which called on police chiefs to listen to and meaningfully consult with the anti-fracking movement on the way future protests are policed.

Within a matter of hours, ACC Woods backed down and agreed to formal public consultation.

The NPCC confirms it has agreed to work with the College of Policing on the consultation and review.

Keith Taylor is informed that a Colege of Policing working group has been set up to draft new guidance and the consultation will last six weeks. The NPCC also confirms a specialist has been identified to head up the public consultation process and a deadline set for preparing the draft by the end of October 2018.

Another update from ACC Woods confirms only that the public consultation will take place in “Spring 2019” but that the NPCC and College of Policing intend to review feedback by Easter, which is late April.

A question from a journalist to the NPCC leads to a response saying “the College of Policing is currently working on producing guidance on the policing of long-term protests” and that “this guidance will contain a section specific to onshore oil and gas exploration (such as fracking)”.

This is the first indication anyone has heard of this change of direction.

The NPCC also says “public consultation on the update is hoped for “in the first quarter of 2019”.

The Guardian and environmental investigative website DeSmog publish the correspondence between ACC Woods and Keith Taylor MEP, who described the failure to launch consultation as “a “series of missed opportunities and broken pledges”.

The deadline for launching the consultation had now been pushed back to “Summer 2019 at the earliest”, the College of Policing told DeSmog.