The case for protest anonymity 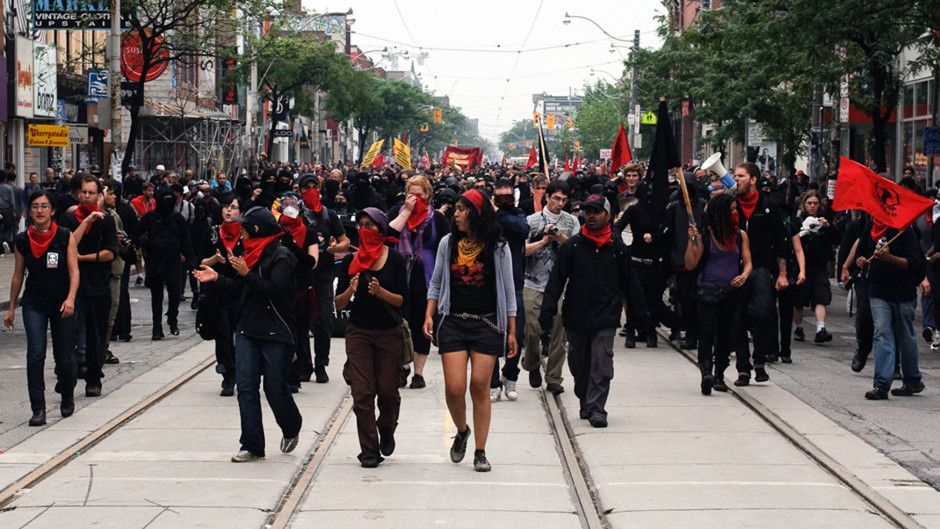 A campaign launched by Netpol is seeking to challenge attitudes towards greater protection of protesters’ privacy, has sparked considerable feedback about the ethics of wearing a face covering or mask.

This article originally appeared as a post in May 2015.

Some have argued an established position that protest is fundamentally about making a public stand in support of individual beliefs. Wearing a face covering therefore removes, not least in the eyes of the courts, a level of personal accountability for how you act in support of those beliefs.

Others, notably some anarchists, have insisted the option to ‘mask up’ is hardly new and there is little evidence to suggest a wider group of protesters, who have repeatedly resisted ‘black bloc’ solidarity tactics and are unwilling to actively frustrate oppressive policing, will suddenly embrace it.

There are merits in both of these positions, but both assume that face coverings are intrinsically linked to public disorder – either as a protection against police violence or, conversely, somehow emblematic of the use of violence by protesters. We think, however, that the growth of police surveillance has made the need for greater anonymity a much bigger issue, for everyone who takes part in any protest.

It is certainly true that part of the philosophy of protest is standing up to be counted – but for many, this is becoming a choice about whether to risk attending a public protest or not. The increasing unpredictability of aggressive police tactics and the way mass surveillance now enables the targeting of individuals within a crowd, for intelligence-gathering or the prospect of sudden arrest, has weakened the collective sense of safety and solidarity that a rally or demonstration provides.

So too has the narrowing of what is deemed ‘acceptable’ protest (almost always a pre-negotiated march and rarely any forms of direct action or civil disobedience) and the division of protestors into ‘good’ and ‘bad’, isolating particular groups to make it easier to control crowd behaviour.

It is important to remember that public order intelligence gathering by the police is carried out with a deliberate purpose: what some criminologists have called ‘strategic advantage’ and ‘strategic incapacitation’.1 Intelligence is used to understand the structures, sustainability and strengths of protest groups, in order to develop ways to undermine them.

This is why, in incidents of harassment we have repeatedly highlighted, so-called ‘domestic extremists’ have faced visits or letters to their homes. This is why Forward Intelligence Team officers have been known to follow individuals for hours, even days, sometimes when they are with their children or families and even to their workplace. This overt intelligence gathering is undoubtedly also used to identify possible targets for undercover policing and to help ’embed’ undercover officers.

In the face of concerted attempts to undermine political protest movements, it is entirely legitimate to actively resist police surveillance. However, it is also important to remember, in rebuilding and promoting solidarity between protesters, that anonymity is not just a way to avoid becoming an entry on the ‘Crimint‘ or National Special Branch Intelligence System databases. There are many other reasons why individuals do not want to face constant surveillance.

We have spoken to protesters who are international students and who are worried about the possibility that their participation in a demonstration might impact on their studies. Education and youth workers have told us about warnings that their participation in anti-EDL demonstrations would have a detrimental impact on their careers, or even lead to dismissal. People awaiting the outcome of asylum claims may not want immigration services to know they have been politically active and, for similar reasons, young people (especially young Muslims) may be understandably wary of unwarranted attention from the government’s ‘Prevent’ programme. Others may have concerns that their faces might end up on a far-right website. In some cases, people participating in protest may worry about negative consequences for relatives in their country of origin (something Congolese protesters told us, for example, in 2011).

Rather than acting as a barrier, anonymity may in fact represent the main deciding factor for many about whether they are able to ‘stand up and be counted’ at all.

Whatever the reasons, it remains true that as long as the decision to cover up is taken only by a tiny minority, wearing a mask as a way of maintaining some degree of anonymity does increase the risk that the police will pick people out for arrest (and, on occasion, to try to deliberately fit them up). Officers do so precisely because they know the courts by default seem to perceive masked protesters as inherent “troublemakers”.

We want to change this – and we think one of the few ways to do so is to normalise the wearing of a face covering, so that it no longer perceived as a symbol of a minority.

If face masks become commonplace at protests, a choice made by an increasingly larger number of people, this can help make it more difficult for magistrates and judges to view covering your face as an aggravating factor, or as a legitimate indicator of impending disorder. Equally, the more people wear them, especially in ‘peaceful’ circumstances, it becomes harder for the police to justify a mask as ‘reasonable suspicion’ for using stop and search powers.

We have no expectations that this will happen overnight, but we also see no prospect of change unless we start to shift attitudes within UK protest movements towards greater concerns about privacy and anonymity – in ways that protesters elsewhere in the world seem to understand instinctively.

That is why we are not only crowd funding to produce hundreds of free face coverings, but also planning to hold a ‘Privacy Bloc’ at a future demonstration to highlight the issue. We hope it will become the first of many.

Ultimately, we hope that even the fluffiest, most peaceful demonstration will involved people covering their faces, often for no other reason than an act of solidarity with others who have a greater need for anonymity. We hope protesters will do so not because they are not prepared to stand up and be counted, but because they are not prepared to sacrifice their rights to privacy to a growing surveillance state in order to enjoy fundamental freedoms of assembly and expression.